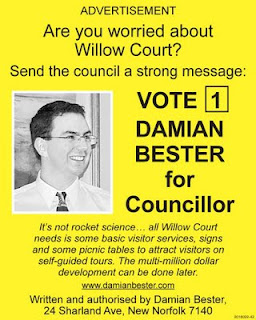 LAST week there was some suggestion that my family must have shares in the Derwent Valley Gazette, with me smiling happily from my bright yellow advertisement on the front page, and dad looking altogether too cheerful in the ad for Millingtons. I can't speak for the funeral mob, but I'm certainly being charged full price for my election advertising - and they even wanted the money upfront, 20 years service to the company or not ;-)    Anyhow, I can assure everyone that it's still the Murdoch family which owns the Gazette, and not the Besters.

I've run several more ads in today's Gazette, and while the Willow Court topic doesn't really need much of an introduction, here's what I think:

The Willow Court historic site has massive potential and could be developed, with due sensitivity, to the great benefit of both our history and our economy. The council must open Willow Court to visitors as soon as possible.

The council frequently compares the site with Port Arthur, but has failed to learn the lessons of Port Arthur. Willow Court is at the same point Port Arthur was a few years after it closed in 1877. At that time all the famous buildings there were completely intact. It was neglect, vandalism and ignorance that turned them into ruins. We are going down the same road.

Several members of the council have acknowledged that the money for Willow Court has been mismanaged. Some, quite notably, have not. One in particular has said he has not thoroughly inspected the books, despite $2 million being spent with no obvious result.

The council has spent a fortune on expert advice but has not attended to basic matters such as electricity supply and site security. Precious historic items have been stolen or destroyed. The council must also explain why hundreds of thousands of dollars of Willow Court money has been used to fund Valley Vision.

The way forward need not be complicated. Until funding is found for a big redevelopment, the council could provide basic visitor services on the site, produce a brochure, erect some information panels, and invite people to visit and perhaps enjoy a picnic on the lawn. Isn’t that the way we used to visit Port Arthur, before it received its own multi-million dollar makeover?
Posted by Damian Bester at 8:41 PM