THE Derwent Valley Council has recently issued its latest newsletter. Click here to download a copy.
Posted by Damian Bester at 10:59 PM No comments:

MINUTES of the council's March meeting were ratified at the April meeting. Unfortunately the answers to my questions, recorded in the minutes, do not match what was said and by whom.

Here are the topics I raised during "questions without notice" at the end of the March meeting, followed by the answer recorded and the actual answer given.

Mr Mayor, will you provide an update on what has happened at F Ward since the fire?
Answer recorded: The Mayor advised that Council has gone through the process and it is being demolished under the Work Place Standard regulations.
Actual answer: The mayor said the building had to be demolished. The general manager said an insurance assessment had been conducted and council insurance would cover the cost of the removal of debris from the site. It was becoming clear that re-use of the bricks may not be possible.

Mr Mayor, will our insurance cover anything other than the removal of debris from the site of F Ward?
Answer recorded: The Mayor advised that the removal of debris is covered under our insurance and the building is also insured. The amount will be a matter of negotiation with the insurers.
Actual answer: The general manager said substantial argument was likely over the value of the buildings.

Mr Mayor, was the F Ward foundation stone salvaged as requested?
Answer recorded: The Mayor advised that we will investigate the issue in regard to the foundation stone and if possible have it salvaged.
Actual answer: The general manager said he did not know and would find out.
Posted by Damian Bester at 10:37 PM No comments:

Back to Willow Court

IT looks like it will be a great day in New Norfolk this Sunday, with opportunities to visit some of the buildings at Willow Court between 11am and 3pm, and a free barbecue at the Frescati garden between noon and 2pm. I'm sure a gold coin donation would be appreciated by the organisers of both events.

I spent a couple of hours helping to sweep out C Ward at the weekend and look forward to this and other buildings being progressively restored and appropriately interpreted for future visitors.
Posted by Damian Bester at 10:19 PM No comments: 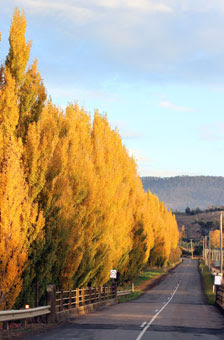 I SPENT a couple of hours at Bushy Park this afternoon, helping to get the War Memorial Swimming Pool hall and grounds ready for Anzac Day. Thanks to the volunteers from the hall committee and the Loyal Glenora Lodge for their great work. The Anzac Day Service will be at 11am this Wednesday (all welcome). There will be a barbecue and eightball afternoon afterwards.

The poplars were looking their autumnal best and I took this photo during a break from wheelbarrow duties.
Posted by Damian Bester at 11:52 PM 2 comments:

BELOW is my latest councillor update, published in the Derwent Valley Gazette on April 18, 2012. 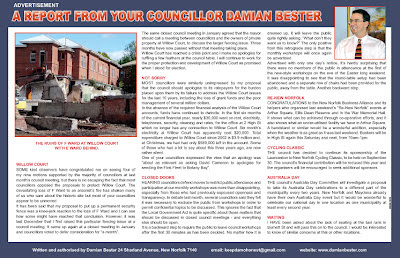 Posted by Damian Bester at 11:07 PM No comments:

ADVERTISED with only one day's notice, it's hardly surprising that there were no members of the public in attendance at the council's monthly workshop last Thursday night, the eve of the Easter long weekend. I was disappointed to see that the round-table setup had been abandoned and a separate row of chairs had been provided for the public, away from the table.

Willow Court was the first topic discussed and it dominated the evening. The general manager advised that he had just received a new draft memorandum of understanding (MOU) on Willow Court from David Llewellyn, who had been appointed to chair the yet-to-be-established Willow Court Conservation and Development Special Committee. He had also received a deed of variation for the long since lapsed State Government grant for Willow Court. Mr Mackey said the variation would allow the $750,000 grant to be used on various buildings at Willow Court. He understood that the government had accepted the amended MOU and noted that it did not provide staff for the site.

Mr Mackey said Mr Llewellyn would advise the council on appointments to the new committee but finding volunteers may be a challenge because the positions are unpaid. Cr Judy Bromfield said she hoped the MOU would be ready to be signed at an open day at Willow Court on May 6.

At this point I expressed some concerns about what had been said so far. I asked whether the full amount of the $750,000 State Government grant still remained and the general manager responded that it was now closer to $580,000. It seemed to me that the council's approach to Willow Court had been turned on its head and this would result in more delays. Having initially rejected the government's offer because it did not provide a project officer for Willow Court, this principle now seemed to have been abandoned. The council decided last year that the new committee should be established without delay, but others decided not to start the committee until the MOU was negotiated and a project officer appointed. Now the general manager was proposing that the committee be established and that it would review the MacDonald report and prepare a program of works, and then there would be negotiations for the provision of a project officer.

In response to questions from myself and Cr Scott Shaw, the mayor advised that the State Government would in fact pay for a project officer even though it was not specified in the MOU and it was possible there may be short-term managers responsible for specific tasks rather than one for the whole project.

While I am not happy with this latest change in approach, too much time has been wasted by the council in the negotiating of an agreement with the government. We have tasked David Llewellyn to lead the conservation and development of Willow Court and I believe he will do his best. This was echoed by Cr Bromfield who observed that the MOU did not say all she would have liked it to say but Mr Llewellyn would do everything he could.

Cr Lester asked how much money was left in the Willow Court reserve account other than the $580,000 grant money and the general manager responded "that's it." Cr Lester then asked whether anyone had spoken to Heritage Tasmania about demolishing G Ward (Glenora House) at Willow Court, with a view to making the site more attractive for development. Mr Mackey said he had spoken to Pete Smith at Heritage Tasmania and he would not be averse to receiving such an application, although "we would never get one through in relation to the two-storey buildings".

Mr Mackey said he would prepare a report on the MOU and deed of variation for the next council meeting.


Still on the subject of Willow Court, Cr Shaw asked why the barracks building couldn't have a fence like that around Frescati. Mr Mackey said his preference was to have a fixed fence rather than to continue to hire a temporary fence. Cr Lester said the owner of the administration building had a proposed an aesthetically pleasing fence and lighting project and I asked when the council would meet private property owners to discuss fencing at Willow Court as had been decided in January.

Moving on, Mr Mackey said he had been speaking to Paul Lennon who was negotiating on behalf of another property owner at Willow Court to resolve access issues affecting the Lions Club and Masonic Lodge.
Posted by Damian Bester at 11:43 PM 4 comments:

HEARING councillors support moves to restrict public attendance and participation at our monthly workshops was more than disappointing, especially from those who had previously espoused openness and transparency.

At last month's council meeting the agenda included the report of a working party formed to investigate the pros and cons of establishing a formal committee system at the council. This related to things such as planning, finance and audit committees and not the council's range of existing Special Committees.

It's certainly an understatement to say this report went in a different direction than was expected. It was formed to investigate the introduction of a committee system and recommended against it. It recommended consideration of an audit committee; closing workshops to the public after 30 minutes; and reviewing councillor membership of committees every 12 months.

Rather than simply vote against the recommendation, I proposed:
Unfortunately this did not win the support of any councillors other than deputy mayor Barry Lathey.

Councillor Wayne Shoobridge then proposed, and Cr Chris Lester seconded the motion that:
After listening to other councillors state their case, this is what I had to say:

Mr Mayor, I had tried to adopt a moderate response to this matter, which was clearly unsuccessful. Now let me be equally clear: the report before us is the report of a committee which has exceeded its authority.

When this committee's progress was discussed at a recent workshop, my recollection was that the councillors present expressed their clear desire for a planning committee to be established. Instead, the committee has reached the conclusion that a committee system in some way lacked transparency.

Mr Mayor this is the second attempt to restrict public participation at workshops. The first was the cruel hoax of ceasing advertising but claiming the meetings were still open. The working party's report gives the lie to that ridiculous situation.

It will be a backward step to ask the public to leave council workshops after the first 30 minutes as is proposed. No matter how it is dressed up, it will leave the public quite rightly asking: "what do they have to hide? What don't they want us to know?"

In coming up with its unexpected recommendation Mr Mayor, the working party has also failed to consult public on its proposal. The public is to be evicted from each workshop after a mere 30 minutes, and they have not even been asked their opinion.

Mr Mayor, before I resume my seat I will briefly address the panel’s final recommendation, for a yearly review of committee memberships. This too is excessive. Committee membership is already reviewed every second year, and should remain so. A yearly review would be unnecessarily disruptive to the committees we represent.
Posted by Damian Bester at 11:48 PM No comments: