THE council last night voted unanimously to extend the deadline for tenders for the Willow Court oval precinct for a further two weeks. This was following requests from representatives of two national corporations interested in the site. I look forward to the opening of the tenders a fortnight from today.
Posted by Damian Bester at 9:48 PM No comments:

THE following list of election priorities appeared in the Mercury last week and is worth publishing here, now that the State Election has been called for March 20. This time around, I believe candidates who ignore the Derwent Valley will do so at their own peril.

Please note: By law, online comments relating to the State Election must include the given name, surname and locality of the writer. Anonymous comments cannot be published.
Posted by Damian Bester at 10:52 PM No comments:

ON Tuesday evening last week, several councillors and the general manager conducted an informal inspection of various street beautification works at Bridgewater, New Town and Kingston. The party included Mr Mackey, Mayor Evans, Deputy Mayor Farrell, and Councillors Lathey, Graham and myself. We were particularly impressed by recent works in the area near Channel Court at Kingston - in particular the attractive planting of trees at the edge of the footpath. A photo appears below and I would be interested in any feedback on this look as a solution for the Burnett St problem. 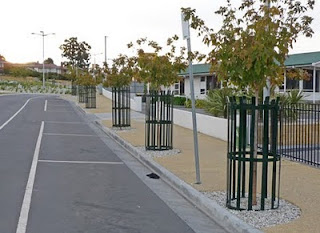 YESTERDAY was an enjoyable outing spent in the company of my St John Ambulance colleague Wendy in the first aid room at the Bushy Park Show. There was an excellent country show put on by the Bushy Park Show Society and I congratulate them on their initiative. I understand that the day was profitable despite a low attendance no doubt caused by unfavourable weather in Hobart. Despite this setback it was a wonderful day in the country, punctuated by only occasional calls for medical attention from Wendy and myself. Well done to everyone involved.
Posted by Damian Bester at 1:52 PM No comments:

Business community gets together

I'M just home from a very convivial Derwent Valley Chamber of Commerce function at the recently reopened bistro at the Star and Garter Hotel. About 30 people attended for dinner and to hear Mario Cortes speak briefly about his passion for the town and valley. Mario is the enthusiastic owner of the former administration building at Willow Court and has made this fine art deco building his home. Mario kept his remarks to a minimum as there were quite a few other diners in the room - including a friendly bunch celebrating a birthday. Congratulations to chamber members Faye Windsor and Janet Biggar for organising this successful function. I believe another is planned. Service and meals at the Star were excellent.
Posted by Damian Bester at 11:06 PM No comments:

AFTER a couple of weeks' leave it was back to work last week - with a few council obligations thrown in as well. On Monday night (February 1) I attended my first meeting of the Maydena Community Association. The council was well served on this committee by Cr Judy Bromfield for many years and it was my pleasure to be elected to take her place when she decided not to re-nominate. The Maydena body is a great example of dedicated people serving a self-help community. The association manages most of the local facilities, such as the community hall, swimming pool, tennis courts etc - and it was responsible for the development of the town's latest tourist attraction... the Railtrack Rider. Well done to this committee. I look forward to serving it as the council representative.

On Wednesday night I worked late to catch up on some paperwork, missing the monthly Chamber of Commerce meeting in the process. I had thought the monthly meeting was being rolled into the special dinner function being held this week... but I was wrong. Sorry team!

Thursday night started with the monthly meeting of the Bushy Park Swimming Pool Special Committee. This is a great team of people and we had an enjoyable discussion in the shade area alongside the pool. How was the serenity? Marvellous. The outdoor environment got me to thinking about some projects I may be able to help the pool crowd with. More on that later.

An early end to the pool committee meeting enabled me to get back to New Norfolk for this month's council workshop. The first hour had seen presentations from Cheryl Rainbird on the great success of the Derwent Valley Community House, followed by Emma Wilson and her idea for a sustainability centre at Willow Court. Emma was wrapping up her talk as I arrived, but I had been fortunate enough to hear her ideas while at Maydena a few weeks back, where her parents run a local accommodation venture.

Check back later for a rundown of the rest of the workshop meeting. We covered a lot of ground - and tomorrow night we will cover even more ground when we head off to Bridgewater, Glenorchy and Kingston to look at several different roadwork projects.
Posted by Damian Bester at 10:12 PM No comments:

REGULAR readers of this blog will recall that an unknown number of anonymous posters used this site to vent their anger over recent changes at Valley Vision - in particular the decision of the two council-funded staff members to resign and take up jobs with the State Government. I felt it was important that any interested person be able to decide for themselves the council's role, and my own, in these recent events. To this end, a tabled a written report to the January council meeting, which was unanimously approved and entered into the record by all councillors at that meeting. The text of that report follows.

The purpose of this report is to advise councillors of the recommendations of a committee meeting held to discuss the Council’s future relationship with Valley Vision.

It was resolved that the general manager communicate the committee’s recommendations to the Valley Vision staff as soon as possible, to prevent any misapprehensions or misunderstandings.

Subsequently, councillors were advised on the afternoon of January 8, 2010, that the two Valley Vision staff had tendered their resignations, effective January 15.

The mayor issued a media release to the Derwent Valley Gazette, thanking the Valley Vision staff and wishing them well for the future

After tabling this report, I point out that no councillor at the committee meeting had expressed the view that Valley Vision should continue to operate in the manner in which it has done to date.