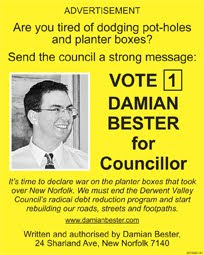 THOSE planter boxes in Burnett St, New Norfolk, have certainly been the talk of the town over the last year or so, which made them a good topic for my first election advertisement in the Derwent Valley Gazette today. In many ways, the planter boxes are symbolic of the council's misplaced priorities. The expensive pink boxes are in stark contrast to the poorly maintained street itself. For a long time I've said that the role of councillors is to set policies and not worry about potholes, but the state of our roads, streets and footpaths is beyond a joke and now cannot be ignored.

Whether I'm elected or not, the council must allocate a larger share of its budget to roadworks and it must explore all opportunities for state and federal funding, including low-interest loans if possible. Those councillors seeking re-election should explain what they have been doing while our roads have been going to ruin.
Posted by Damian Bester at 8:27 PM