A new beginning for our Valley

A QUICK note to thank all those friends who entrusted me with their number one vote in today's Derwent Valley Council election. I am humbled by the level of support, which at present appears more than sufficient to see me elected in second spot, just after Scott Shaw. Scott was not successful in his attempt to be elected mayor, but he and I are equally excited by the boundless prospects ahead of us all, under the leadership team led by new mayor Martyn Evans and new deputy mayor Craig Farrell. There will be more to say in the days and weeks ahead, but for now, my sincere thanks once again. I will not let you down.

Martyn, Craig and I posed for this photo as we were leaving the tally room at Elwick an hour or so ago. 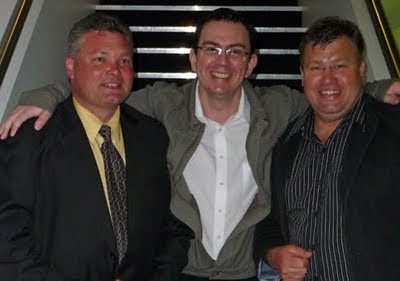