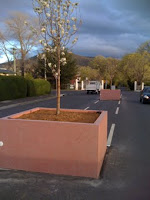 I'VE been asked about my position on those controversial planter boxes in Burnett St, New Norfolk, after my "declaration of war" in my advertisement on the front page of last week's Derwent Valley Gazette. Like many people, I have no problem with the concept of beautifying our streets. The idea of placing mature trees in pots was a good one, but something went wrong along the way. The expected circular pots ended up being the large pink pillboxes we are all now familiar with. The trees weren't quite as mature as some might have anticipated.

As they stand, the planter boxes are a hazard to traffic and to pedestrian safety. Nearly all of the boxes have battle scars providing evidence of the poor execution of the original idea. Their placement was ill-considered as several of the boxes block the sight-lines of most motorists. The height of the boxes is another problem as they are just the right size to hide a child from view.

The common-sense solution is to remove the boxes and replace them with the smaller, rounder, POTS we were expecting. The cost should be borne by those responsible for the current debarcle.

In this age of recycling we might even be able to find a new use for those pink boxes. Perhaps they could be used for a sewerage plant at Westerway!
Posted by Damian Bester at 8:54 PM