TONIGHT I have lodged my registration and declaration with Funding and Disclosure Inc. This is a relatively new group with the following objectives: 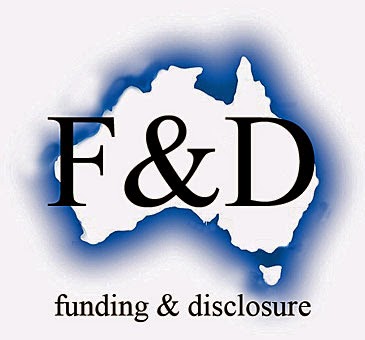 The group has a website and Facebook page and it gained some mainstream media attention when announcing its intentions earlier this month. It invites all candidates in the 2014 Tasmanian local government elections to register, declare any donations or gifts received in the last 12 or 24 months, and then make progressive diclosures of all donations and gifts received during the election period.

Funding and Disclosure Inc also asked about political party affiliation. I have none, and never have. My impression is that those councillors who have hitched their wagon to one party or another have generally ended up pretty much disappointed by the experience. I prefer to tread my own path. In this election I'm once again offering myself to serve the residents and ratepayers of our municipality, equally and without fear or favour.


Please note: Following the issuing of the notice of election, readers' comments relating to the election must include the given name, surname and locality of the writer. Anonymous comments cannot be published.