THE Derwent Valley Council's independent Code of Conduct Panel has recommended that I be reprimanded in the matter of a complaint lodged by Mr Ian Brown of Risdon Vale. Significantly, the panel found "that there was no positive proof of premeditated and deliberate intention to embarrass, discredit or malign Mr Brown" and there was no need for a personal apology.

The panel took the view that I "should have been aware of the possibility of of personal offence and acted in a more caring and sensitive manner". To this end, the panel recommended that I "attain an understanding" of Councillor Code of Conduct obligations as follows:


While I object strongly to the suggestion that I do not already act in accordance with those principles - both as a councillor and in my life generally - it is not my intention to appeal the panel's recommendation of a reprimand.

If no appeal is received from myself or the complainant by August 4 or thereabouts, the panel's recommendation will be considered firstly by a closed council meeting and finally by an open council meeting.

Comments will not be published until this matter is concluded. 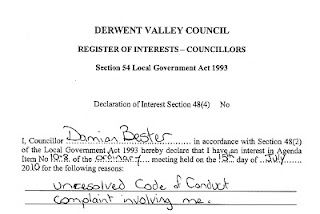 Posted by Damian Bester at 7:36 AM